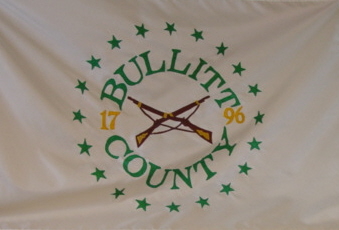 This flag was adopted as the official flag of Bullitt County by Bullitt Fiscal Court on September 18, 1967. The design was created in 1967 and first displayed on December 13 of that year at a ceremony at Roby Elementary School, marking the 171st anniversary of the county.

White represents salt. Salt was an important factor in Bullitt County history. The first commercial salt works west of the Allegheny Mountains was erected at Bullitt’s Lick. This was partly responsible for settlers coming to the county.

Green represents the beautiful land. Game was plentiful, and fertile soil yielded abundant crops upon which the people thrived.

The Circle of Stars represents Bullitt County’s rank as the 20th county created in the state.

1796 represents the year Bullitt County was created by the Kentucky Legislature, December 13, 1796.

Crossed Muskets represent the Pioneer days of the county. The battles fought to gain and hold the land, to survive in the wilderness; the food it provided; security when in need.

The Bullitt County History Museum, a service of the Bullitt County Genealogical Society, is located in the county courthouse at 300 South Buckman Street (Highway 61) in Shepherdsville, Kentucky. The museum, along with its research room, is open 9 a.m. to 4 p.m. Monday, Tuesday, Wednesday and Friday; and from 9 a.m. to 6 p.m. on Thursday. Admission is free. The museum, as part of the Bullitt County Genealogical Society, is a 501(c)3 tax exempt organization and is classified as a 509(a)2 public charity. Contributions and bequests are deductible under section 2055, 2106, or 2522 of the Internal Revenue Code. Page last modified: 07 Sep 2020 . Page URL: bullittcountyhistory.org/bcflag.html