Shots rang out at Huber's Station, a railroad depot just south of Louisville, Kentucky on August 11, 1904. Less than a day later, Francis Hagan lay dead as his grieving widow arrived from their Alabama home, too late to bid him farewell. Meanwhile his killer, John Barbour, sat in jail pondering his future.

Within the pages of Murder or Not? follow the trail of events that brought these men, once friends, to this tragic end; and learn what John Barbour's fate would be.

This true story is filled with charges of deception, fraud, and attempted assassinations, and is based on original court records and depositions, and on newspaper accounts of the time. In the end, the reader is challenged to decide if justice was truly served.

David Strange, Bullitt County History Museum Director, has this to say about this latest book by Charles Hartley.

"Fact is often more interesting than fiction, and such is the case with Charles Hartley's new book, Murder or Not?. This book needs no fictional characters or made-up storyline. Fact is more than enough to consume the reader's attention.

"Anger and built-up mistrust seething just under the surface.

"A blatant murder is committed right in front of a train-load of people.... yet was it murder?

"And subtly intertwined is a second mystery; a woman found killed in a nearby barn, but the crime unsolved... or hidden.

"Charles Hartley, in his usual wonderful style, begins telling a little of the story, a few of the facts. And before one knows it, the reader is drawn into a book that can't be laid down.

"Not 'fact-based' but completely factual as best as Mr. Hartley's solid research allows, Murder or Not? should be particularly interesting to those who study the law. But it will also satisfy those who just love a good mystery, or, are lovers of small-town history." 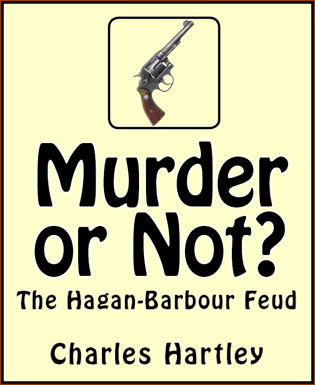 The book is currently available in both print format and as a Kindle Book.

For those with a Kindle, it can be purchased for $2.99 by following this link.

The print version is available from Amazon.com for $6.99 plus shipping.

The Bullitt County History Museum, a service of the Bullitt County Genealogical Society, is located in the county courthouse at 300 South Buckman Street (Highway 61) in Shepherdsville, Kentucky. The museum, along with its research room, is open 9 a.m. to 4 p.m. Monday, Tuesday, Wednesday and Friday; and from 9 a.m. to 6 p.m. on Thursday. Admission is free. The museum, as part of the Bullitt County Genealogical Society, is a 501(c)3 tax exempt organization and is classified as a 509(a)2 public charity. Contributions and bequests are deductible under section 2055, 2106, or 2522 of the Internal Revenue Code. Page last modified: 05 Oct 2020 . Page URL: bullittcountyhistory.org/announce2.html